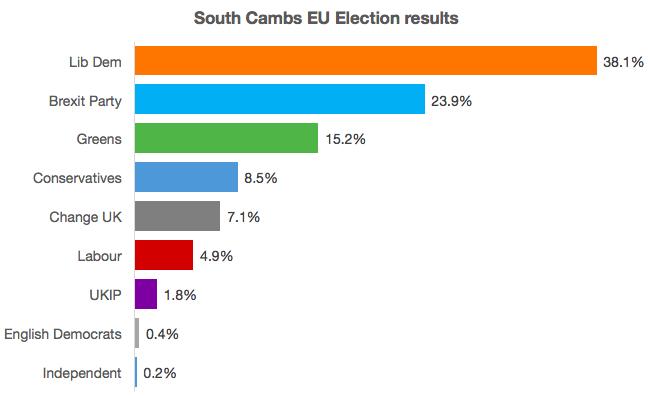 Leading councillors in Lib-Dem run South Cambridgeshire have expressed their anger at the way in which Cambridgeshire and Peterborough Mayor James Palmer has intervened in the planning application for a controversial proposal by SmithsonHill for an Agritech park in the countryside.
Read more

It's a year since the Lib Dems' big election victory saw us take control of South Cambs District Council from the Conservatives. So what have the 30-strong Lib Dem Group been up to in the past year? Here's a roundup of some of our achievements.

Going Green to the Core in South Cambs

South Cambridgeshire District Council has installed a large array of solar panels on the roof of the waste management depot at Waterbeach.

The panels will deliver clean, renewable energy, reduce costs and cut carbon emissions, providing around a quarter of all the electricity the building needs.

It's another step towards the Council's ambitious target of making South Cambridgeshire carbon-neutral by 2050.

Accordingly, concern for the environment runs throughout the Council's new Business Plan for 2019-24.

Plans include replacing 1800 footway lights with LED, which will save 60-70% energy, and installing new air-quality monitors in hotspots across the district.

The Lib Dem-controlled South Cambridgeshire District Council is planning to make provision for up to five refugee families in the district.

Depending on the scheme through which they arrive, they may be Syrian families who have fled violence and torture in their country, or they may be parents/carers with vulnerable or ill children from Sudan, Syria or Iran.

During the previous Tory administration, the Lib Dems’ calls to assist such people in desperate circumstances were repeatedly overruled. Under Lib Dem control, the Council is now pleased to be able to offer suitable accommodation for these families alongside the practical support they need to set up their new lives and integrate into their new communities.

Leader of the Council Cllr Bridget Smith said: “The previous administration refused to make provision for any refugees in what is one of the wealthiest areas of the country. We are very fortunate to live in South Cambs - we should be sharing that fortune with people who have less than nothing through no fault of their own.”

This humanitarian response also reflects the Council’s recent consultation for its 2019-24 Business Plan - its intention to work with regional and local partners to support refugees and asylum seekers received no negative responses.

Cllr Hazel Smith, Lead Cabinet Member for Housing, said: “The international refugee crisis sees families fleeing their homes and enduring truly horrendous experiences. It is up to all councils across the UK to take action to provide safe accommodation and, since taking control of the Council in May 2018, the administration has been determined to play its part and offer these families a chance to integrate into safe and welcoming communities.”

A final decision on the plans to support the refugee families will be made at the Council Cabinet meeting on 3rdApril 2019.

South Cambridgeshire Liberal Democrats: The Mayor hasn’t made the case for the off-road Cambourne to Cambridge route

South Cambridgeshire Liberal Democrats do not believe that evidence so far presented by the Mayor has made the case for the off-road option for the public transport route between Cambourne and Cambridge that he is advocating.

We had an active LibDem conference this year at Brighton with several newly elected Councillors making their first speeches and our own Leader Bridget Smith being interviewed by Christine Jardine at the Rally on Saturday evening. See below for their videos.

Our success in the May elections locally provided much motivation and optimism from other delegates at the Conference and we would like to thank all those who were involved in our campaign big or small - we made an impact not only locally but with the party nationally - for that, thank you.

For a round up of LibDem Conference itself and the motions passed please see this section on the LibDem website or see here for a summary of the key commitments we made . The next Spring Conference is in York - 16th-17th March.

Combined Authority Mayor James Palmer has shocked Coton residents by insisting that the route for his proposed metro must go through the village. As recently as August the Mayor had assured Coton Parish Councillors that an off road route through Coton would not happen. Previously he had denied that plans for a metro implied his support for such a route.

Liberal Democrat District Councillor Ian Sollom said "the Mayor has let Coton residents down badly with this u-turn. He has made much of the fact that the Greater Cambridge Partnership can only deliver transport infrastructure he approves, but now he is driving his metro straight through the village."

The Mayor announced his plans to stunned Parish Councillors at a meeting last week.

Europe in My Village - Our local Brexit stories

This is a compilation of local conversations about the positive impact of our country's membership of the European Union, on every sort of community-based concern: the school, the doctors' surgery, the fruit farm, the care home, the shoe shop, the zoo - or whatever happens to be the nearest business to where you live. Equally, it is about the damage to local economies and opportunities, in particular for young people, that extrication from the European Union inevitably brings.

Combined Authority and Mayor One Year On

The political landscape in Cambridgeshire is getting more and more complex. As well as the County Council (responsible for education, health and social care) and the District Councils (responsible for planning, housing and waste management) we have the Greater Cambridge Partnership (formally The City Deal) attempting to deliver transport improvements in South Cambs/Cambridge and now the Combined Authority and the Mayor doing transport, housing and skills throughout the whole county and Peterborough. It will be no surprise that this is proving somewhat challenging to work with especially as there is overlap in what they are all wanting (and in some cases failing) to do.

Following May's elections, history was made as the LibDem group now have control of South Cambridgeshire District Council for the first time in the history of the Council created in 1973. It has been run by the Conservatives since 1992. The two thirds majority of the last year was overturned by a two thirds LibDem majority this year, having won 30 of the 45 seats (reduced from 57). Independents have 2 and Labour have 2 councillors.