We are marching again! This might be our last time to try stop Brexit.

Join us on 23rd of March for the ‘Put It To The People March’ to make the calls for a People’s Vote too loud to ignore. We have hired a coach to take us from South Cambridgeshire down to Central London.

The Liberal Democrats have consistently called for an #ExitFromBrexit and were dismissed as extremists when we first called for a vote on the Final Deal. We marched and fought and now a Peoples Vote is possible - that's down to people like you. Last time, 750,000 people marched and many of our local Party including our new Parliamentary Candidate, Ian Sollom were part of that number.

On 23rd March we will be marching with 1000's of other LibDems and our leader, Vince Cable and other senior Liberal Democrats will be there to make the case for the people to get a vote on the final Brexit deal.

It is important that the turnout for the march is as large as we can make it and the Liberal Democrat presence there is strong, so people are reminded that we are the only national party wholeheartedly committed to an 'Exit from Brexit'.

If you want to make your own way to the march feel free to meet us outside the Dorcester Hotel on Park Lane with the main LibDem marchers - we will be standing under our South Cambs LibDem banner. We will be congregating from 11.30am and aim to join the main march in Park Lane, and marching to Parliament Square to make our voices heard.

We are arranging a coach so we can all go together, chat on the way down and that the coach will make it easier to transport bulky items such as banners, flag polls and placards - we will be joined by our newly elected Parliamentary candidate Ian Sollom as well as many of our newly elected & re-elected Councillors who will be giving us their thoughts on Brexit.

We will have two pickup points in South Cambridgeshire for the north and south of the constituency:

The coach will drop us in central London before the march starts, we are expecting it to be a very busy day traffic wise but we are aiming to be as close to Marble Arch as possible.

After the march the coach will pick us up at 5:00 pm sharp on Embankment. Please congregate by the Isambard Kingdom Brunel statue on Temple place by Temple Tube, we will then head back to Cambridgeshire and drop off at the same 2 pickup points. The journey time will be approximately 2 hours.

We have closed online ticket sales now but we still have some seats available please email [email protected] to reserve and bring cash on the day to pay for them.

Come with your flags, placards & posters - wear your LibDem colours with pride and we would love to march with you - join us as we take our stand to demand that People's Vote. 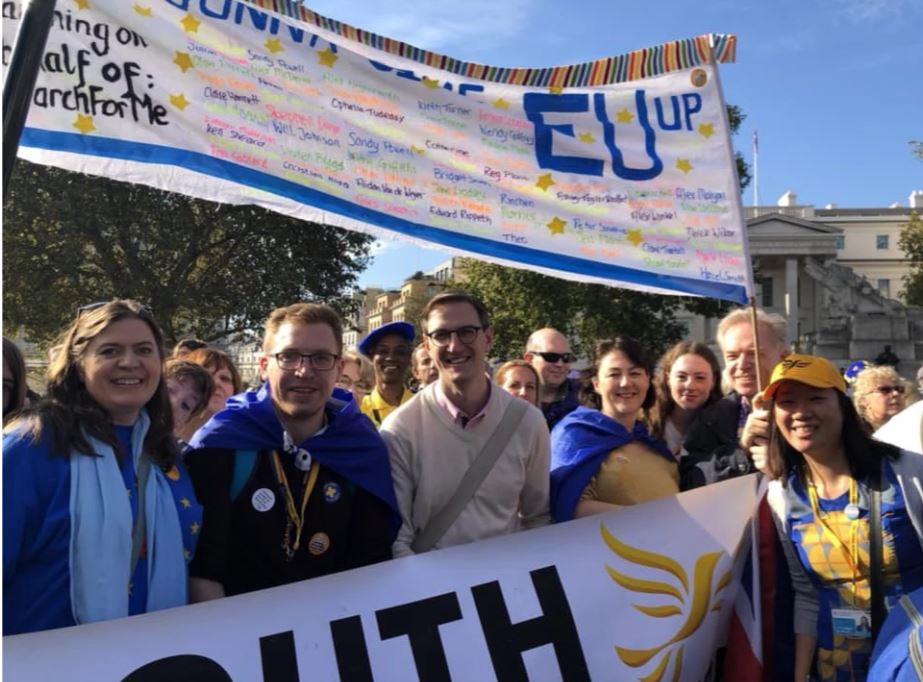